Before I start this post/rant, I just want to say one thing: I love Sarah J Maas’ books – ACOMAF has to be one of my favourite books of the year, and I’m currently working my way through Queen of Shadows. Sarah is an amazing writer with amazing characters, but I do have some reservations about the promotion of her new book, the 5th Throne of Glass novel, Empire of Storms.

Before I rant a little…

THAT COVER THOUGH?! I love the cover for Empire of Storms (both the US and UK editions) and am so excited for it to join the rest of my collection on my bookshelf. Bloomsbury have done an absolutely STELLAR job with Sarah’s covers.

A little background on me – I live in the Northwest of England, and as a recent graduate, I have no idea where I’ll be in October, when Sarah comes to the UK for the Empire of Storms tour. I would have loved to be able to meet Sarah, but the timings of the tour meant I won’t be able to make it.

This has to do with the fact that half the dates on the tour are in the South of England (London, Bath and Cheltenham), one is in Scotland, and another in Dublin. The one closest to me (Birmingham – still up to two hours on the train away!) is on a Monday at 4pm, so it’d be a real struggle to get to. I don’t think I’m alone in this – a lot of these dates are mid-afternoon, during the working/school week, and therefore difficult for many to get to!

I’m always a little disappointed when an author has a UK tour and doesn’t have a date in Northern England. It’s great that authors include Scotland and Ireland, but there are still a lot of fans who simply can’t make it to this tour. I’d be able to attend a date in the evening, or at the weekend (I was able to attend the Cassandra Clare Shadowhunter event because it was at the weekend!).

2. The many MANY editions of Empire of Storms

Because I’m not going to be able to meet Sarah on her tour, I pre-ordered the signed edition from Waterstones. I was really disappointed that I didn’t know Waterstones would be stocking signed editions of ACOMAF, so preordered EoS early so that I’d be guaranteed to get a signed copy.

Now, I’ve already seen the Target and Barnes and Noble editions with exclusive short stories, but now WHSmith, a popular UK newsagent and bookshop, is stocking its own special edition, with an exclusive short story. Now, I’m very hesitant to buy more than one copy of a book – despite intending to purchase the US covers of Sarah’s books – because of a small amount of exclusive content.

I’m, again, a little disappointed in the plethora of editions available. More than one edition always seems like a money-making grab to me, however beautiful they are. When you’ve already preordered a book, it’s frustrating to see more (and sometimes better) editions go on sale.

Which edition of EoS will you be purchasing? Are you going to Sarah’s tour? Comment below or tweet me at @annalisebooks!

There’s tons of exciting new books coming out this September, it’s difficult to choose what to read first! Here’s a selection of my most anticipated.

The adventures of Celaena Sardothien continue in the fourth installment in the Throne of Glass series. I’ve only read the first novel so far (review here), but I can’t wait to get stuck into the second and third books (which are apparently even better!).

Synopsis: Everyone Celaena Sardothien loves has been taken from her. But she’s at last returned to the empire—for vengeance, to rescue her once-glorious kingdom, and to confront the shadows of her past . . .

Celaena’s epic journey has captured the hearts and imaginations of millions across the globe. This fourth volume will hold readers rapt as Celaena’s story builds to a passionate, agonizing crescendo that might just shatter her world.

2. Asking For It by Louise O’Neill (3rd September)

This stand-alone novel has some amazing pre-release reviews and is sure to be a great read, after O’Neill’s debut Only Ever Yours (review here).

Synopsis: It’s the beginning of the summer in a small town in Ireland. Emma O’Donovan is eighteen years old, beautiful, happy, confident. One night, there’s a party. Everyone is there. All eyes are on Emma.

The next morning, she wakes on the front porch of her house. She can’t remember what happened, she doesn’t know how she got there. She doesn’t know why she’s in pain. But everyone else does.

Photographs taken at the party show, in explicit detail, what happened to Emma that night. But sometimes people don’t want to believe what is right in front of them, especially when the truth concerns the town’s heroes…

With a pre-release score of 4.34 and some very excited reviewers, this new series from the author of The Grisha series is set to be a sure-fire hit.

Synopsis: Ketterdam: a bustling hub of international trade where anything can be had for the right price—and no one knows that better than criminal prodigy Kaz Brekker. Kaz is offered a chance at a deadly heist that could make him rich beyond his wildest dreams. But he can’t pull it off alone…

A convict with a thirst for revenge.

A sharpshooter who can’t walk away from a wager.

A runaway with a privileged past.

A spy known as the Wraith.

A Heartrender using her magic to survive the slums.

A thief with a gift for unlikely escapes.

Six dangerous outcasts. One impossible heist. Kaz’s crew is the only thing that might stand between the world and destruction—if they don’t kill each other first. 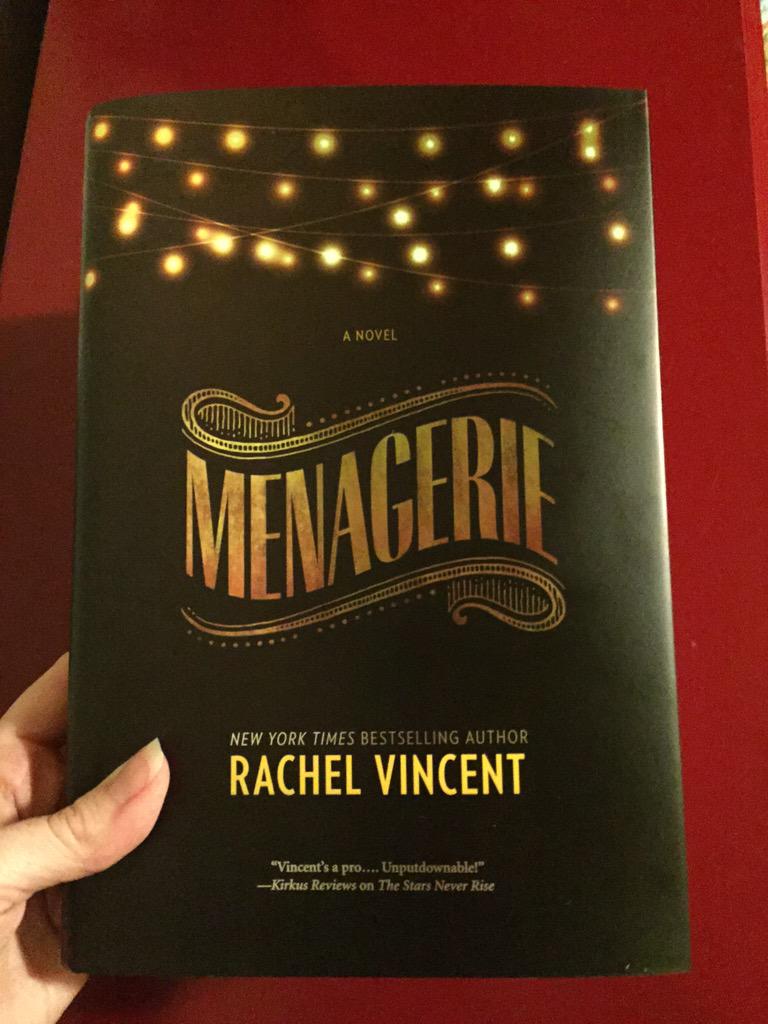 As a huge fan of Rachel Vincent’s Werecats series, I always look forward to her new releases, even if I don’t always read them. Menagerie is looking to be a must-read for me.

Synopsis: When Delilah Marlow visits a famous traveling carnival, Metzger’s Menagerie, she is an ordinary woman in a not-quite-ordinary world. But under the macabre circus black-top, she discovers a fierce, sharp-clawed creature lurking just beneath her human veneer. Captured and put on exhibition, Delilah in her black swan burlesque costume is stripped of her worldly possessions, including her own name, as she’s forced to “perform” in town after town.

But there is breathtaking beauty behind the seamy and grotesque reality of the carnival. Gallagher, her handler, is as kind as he is cryptic and strong. The other “attractions”—mermaids, minotaurs, gryphons and kelpies—are strange, yes, but they share a bond forged by the brutal realities of captivity. And as Delilah struggles for her freedom, and for her fellow menagerie, she’ll discover a strength and a purpose she never knew existed.

What are your most anticipated books? Have you read any of these forthcoming books? Comment below or tweet me at @annalisebooks 🙂